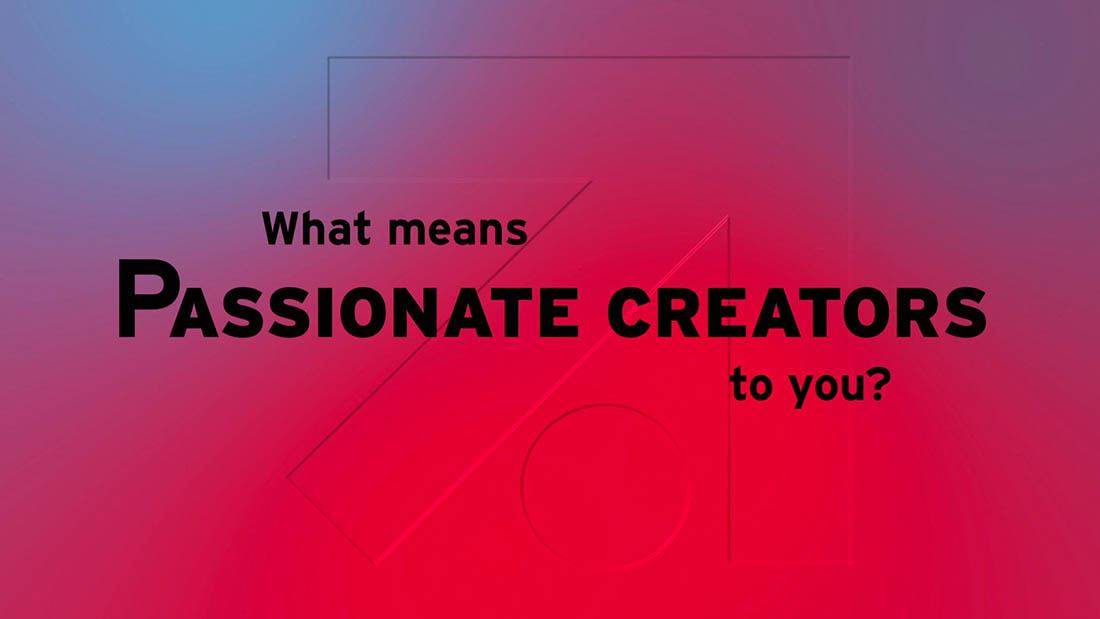 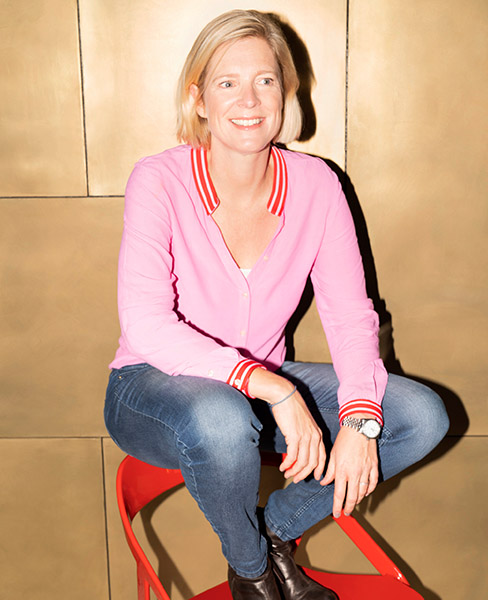 “These 15 minutes are an absolute thrill”

Two perennial rivals have now teamed up. Their adversary: Big, red and stronger than ever. In May 2019, rather than going head to head as usual, Joko and Klaas joined forces and took on their employer. In the prime-time show “Joko & Klaas gegen ProSieben” (Joko & Klaas vs. ProSieben), the two entertainers competed in a string of challenges, playing to win a 15-minute live broadcast slot to fill as they wished. Daisy Rosemeyer-Elbers helped develop and produce the show. As the woman who once shared the studio with Michael “Bully” Herbig and brought home the Eurovision Song Contest victory with Stefan Raab, she understands what makes this new format so unique. And why German television needs more home-grown shows.

How did you develop the idea for this show?

After the success of “Duell um die Welt,” we wanted to try something new with Joko and Klaas. And we were aiming for something that had broader appeal and was more family-friendly than other programs the duo had done. Then, while we were talking with the production company Florida TV, someone said, “Why don’t they compete against ProSieben?” Everyone liked the idea right away. But we quickly realized that there is no single individual who is the face of ProSieben. The red seven is a brand, an attitude — so we went with the abstract figure “Mister ProSieben,” which we had already established in “Duell um die Welt.” We worked with Joko and Klaas and, step by step, we created a concept in which the two of them form a team for the first time. And then we “sweetened the pot” with an unheard-of prize: 15 minutes of live broadcasting time on ProSieben. In prime time.

They gave away the very first 15 minutes they won to “people who have more to say than we do,” as Klaas put it. What those people offered were strong statements on search-and-rescue missions at sea, right-wing extremism and homelessness. That surprised quite a few viewers — you too?

The guys wanted to do something nobody could have expected — and that’s exactly what they did. Giving people a platform who don’t otherwise occupy this space was a stroke of genius. Of course, we were delighted to have generated social value with an entertainment program and, as a TV company that reaches so many millions of people every day, that’s also part of our responsibility. Even though everyone already knew before this show how outspoken Joko and Klaas are in public, we found their courage admirable — especially since the negative reactions to their taking such a clear stance on controversial issues did not fail to appear. So those 15 minutes were also a surprise to us, the showrunners — a fantastic one! Even just the setting: one person in a chair in the spotlight, the camera circling them. It was so focused, so incredibly intense. Definitely a very special on-screen moment. The kind of moment that only happens on live television.

Is that what you find so unique about the show?

This show illustrates the enormous appeal that linear television still has. Live TV is especially powerful: These 15 minutes are an absolute thrill. Nobody knows what to expect, but everyone wants to be there, wants to know what all the buzz will be about afterwards around the water cooler, in the schoolyard or in the media. With this, we proved yet again that we can do strong, local programs. Just good TV. Preferably self-made. “Joko & Klaas gegen ProSieben” was developed for the German-language market and is perfectly adapted to this channel and audience — “tailor-made,” as it were. Our own shows are always best for that. But they’re also the hardest part of my job. Sure, we know what suits ProSieben — but you don’t just pull a successful new show out of your hat. The fact that we are now distributing the show internationally as “Beat the Channel” is a nice affirmation that shows the huge potential our idea has, and not only in Germany.

Between school and studio: For Daisy, a mother of two, the day starts early. And, like the first 15 minutes of Joko and Klaas’s TV show, it often ends late (photo: Pia Klemp, captain of a rescue vessel, reports on her day-to-day efforts on search-and-rescue missions). “As every mother knows, coordinating work and family can be challenging. In my job at ProSieben, I can manage both.”

Between school and studio: For Daisy, a mother of two, the day starts early. And, like the first 15 minutes of Joko and Klaas’s TV show, it often ends late (photo: Pia Klemp, captain of a rescue vessel, reports on her day-to-day efforts on search-and-rescue missions). “As every mother knows, coordinating work and family can be challenging. In my job at ProSieben, I can manage both.” 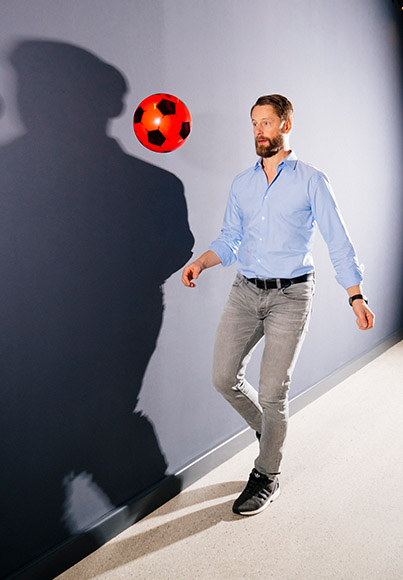 eSports is booming. With almost 10 million fans, this is the fastest growing sports trend in Germany. In no time at all, Stefan Zant has made ProSiebenSat.1 subsidiary 7Sports the leading address in this field and has established traditional editorial coverage of both TV and online broadcasts. Following the acquisition of eSports.com, 7Sports now wants to push its activities internationally: Global turnover in the eSports market is expected to grow from USD 1.1 billion in 2019 to USD 1.8 billion by 2022.

In order to attract new target groups, esports needs explaining. We are the first in Germany to work with an editorial team and experts in the studio, who help make sense of moves, unpack tactics and replay key moments — just as you would expect in sports report­ing. In this way, we are growing the market bit by bit and making esports as popular as main­stream sports. 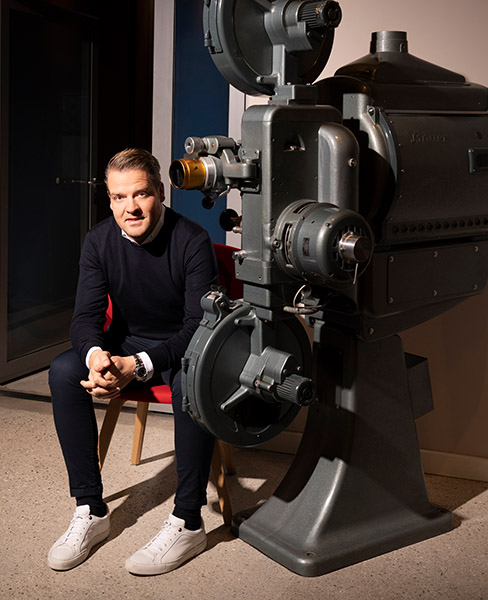 THE MAN BEHIND THE MASKS

“We all have to be strong now! Welcome to the very, very, very last edition of ‘TV total.’” When Daniel Rosemann sits in the ProSieben team meeting room, a piece of television history hangs behind him: the last announcer’s cue card from the 2,303rd and final “TV total” show. Down in the lower right-hand corner, it bears a little message from the master in black felt-tip pen: “Dear Daniel, Thanks for everything! Best, Stefan.” It’s the cue-card version of a medal of honor from Stefan Raab, the king of German TV. A cue card that speaks volumes: ProSieben chief Daniel Rosemann is the man the stars trust.

Shortly after the end of “TV total,” Daniel the Head of Entertainment became Daniel Rosemann, Channel Manager of ProSieben. And the onetime editor responsible for the first season of “The Voice of Germany” faced a Herculean task: how to replace the person young TV fans were tweeting about as “the Man of ProSieben.”

By the summer of 2019, the Twitterverse had long forgotten the subject. Suddenly everyone was feverishly tweeting: Who’s the cute Monster? Who moves as gracefully as a Grasshopper? And what Astronaut can sing such a heavenly version of “What a Wonderful World”? The finale of “The Masked Singer” set records. Germany had never seen more tweets about a TV show in a single evening. The moment when Max Mutzke took off his Astronaut mask brought as many Germans to the edge of their seats as a penalty shoot-out in the Champions League. With a 54-percent market share (14- to 49-year-olds), the event drew the nation to their screens — all except Daniel Rosemann, who was ensconced in his favorite professional spot: the control room, i.e. the engine room of television.

Together with his ProSieben team, he fought harder for the rights to “The Masked Singer” than anything he or the station had ever pursued before: “We were positive that ‘The Masked Singer” would be a big hit,” Daniel Rosemann says. “But I must admit, we didn’t expect it to be this huge. It fits right in with our strategy, though: we’re expanding the share of programming that we produce in Germany, for Germany.”

What was the biggest challenge that came with this show? “Keeping quiet.” Keeping quiet? “Yes. I usually talk to lots of colleagues about the details involved in any show and all the things related to it. I couldn’t really do that in this case.” Why not? “There were only eight people altogether who knew the identities of the stars behind the masks. Even the director didn’t know what star he was showing in close-up at any given moment. That was crucial. When the whole team is guessing too, that’s the best way to tell the story from the viewers’ perspective.”

Note: The day the finale of “The Masked Singer” aired, marked ProSieben’s highest daily ratings in 20 years — thanks to a passionate team. And thanks to Daniel Rosemann, the man behind the masks.

With Raab’s autographed cue card occupying a place of honor in the office, everything goes like clockwork. And a market share of 54 percent at the moment Max Mutzke was unmasked made for plenty of smiling faces.

With Raab’s autographed cue card occupying a place of honor in the office, everything goes like clockwork. And a market share of 54 percent at the moment Max Mutzke was unmasked made for plenty of smiling faces. 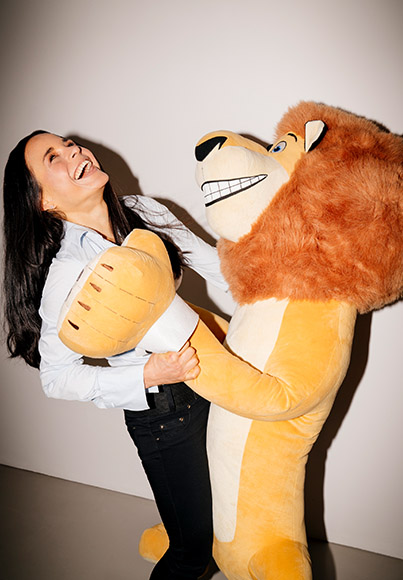 We tell stories from unusual angles, always attempting to deliver a good mix of topical, entertaining, and investi­gative reports. In the past year, we grew together to a dynamic and determined editorial team. And we have big plans for 2020, too. All we can say right now is: It’s going to get loud!”

Investi­gative, bold, emotional: “akte.” has been telling the stories that move Germany for a quarter century. In 2019, SAT.1 set up its own editorial team for the magazine, and has been producing “akte.” itself in Unterföhring since August. This has only enhanced the Group's journalistic profile.